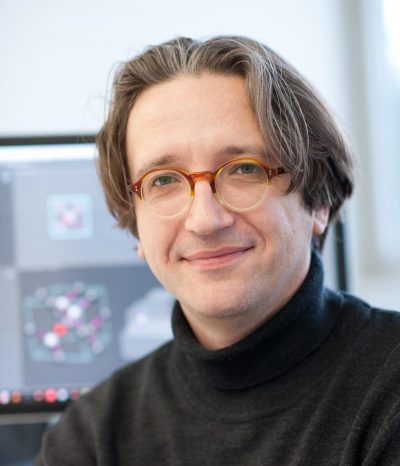 A particularly interesting application of diamond based quantum sensing is the detection of nuclear magnetic resonance on nanometer scales, including the detection of individual nuclear spins or small ensembles of external nuclear spins. Single nitrogen vacancy (NV) color centers in diamond currently have sufficient sensitivity for detecting single external nuclear spins and resolve their position within a few angstroms. The ability to bring the sensor close to biomolecules by implantation of single NV centers and attachment of proteins to the surface of diamond enabled the first proof of principle demonstration of proteins labeled by paramagnetic markers and label-free detection of the signal from a single protein. Single-molecule nuclear magnetic resonance (NMR) experiments open the way towards unraveling dynamics and structure of single biomolecules. However, for that purpose, NV magnetometers must reach spectral resolutions comparable to that of conventional solution state NMR. New techniques for this purpose will be discussed. Most of mentioned above results obtained so far with diamond centers are based on optical detection of single NV color centers. We will also show how photoelectrical detection of NV centers base on spin selective photoionization can provide robust and efficient access to spin state of individual color center.

Fedor Jelezko is the director of the Institute of Quantum Optics and fellow of the Center for Integrated Quantum Science and Technology (IQST) at Ulm University. He studied in Minsk (Belarus) and received his Ph.D. in 1998. After finishing the habilitation in 2010 at Stuttgart University he was appointed as a professor of experimental physics in Ulm in 2011. For his scientific achievements in the field of solid state quantum physics, he has received several honors, in particular, the Walter Schottky Prize of the German Physical Society, ZEISS Research Award and in 2018 he received the first Shpol’skii-Rebane-Personov medal and prize.

Professor Jelezko has more than 170 papers in refereed international journals including 5 articles in Science, 2 articles in Nature, 18 articles in the Nature family of journals (Nature Materials, Nature Physics, Nature Nanotechnology, Nature Photonics, Nature Communications). This work has achieved more than 10 000 citations and an H-Index of 49. Jelezko listed among most cited researchers in Thomson-Reuters list (2014 and 2015).

His research interests are at the intersection of fundamental quantum physics and application of quantum technologies for information processing, communication, sensing, and imaging.